This is a new start for the Okie Traditionalist blog, after gauging the level of support from the current target audience--that is per se Latin Mass Catholic readers--and from a similar appeal for feedback I made a year ago.

Thank you to those who have bought my e-book novel, including during the fundraiser, and for all those Catholics who have read these pages and contacted me giving support and constructive feedback over the years.  I'm taking a break until Christmas for other tasks and hobbies, including writing another book, I will link to here.

When I return, the renewed audience is the one I started with when I started this blog the summer of 2016, that is ordinary Okies in my area, but also beyond, whether they are Catholic, Protestant, or otherwise, and if they are Catholic, whether or not they attend the Ancient Mass or the reformed New Rite.

My blog ended up evolving to address traditional Catholics, who attend the Latin Mass, with a focus on the Crisis in the Catholic Church.  If you would like to know all my thoughts on topics like Vatican II, the New Mass, the current man sitting on the Throne of St. Peter, the SSPX, and other traditionalist topics, or any other internal ecclesial matter, whether good or bad, you have my archives.

Going forward, I will be talking about a level of reality below that of the divine Church and divine religion, that God designed to act in concert with the Church, that is the secular realm of life, society, culture, human nature, nature itself, and reason.

I will be appealing to common sense, philosophy, and history.  My ultimate end is to help advance Christendom, that is the preservation of Christian, Western Civilization, but also to sow seeds that may lead the reader to study the Catholic Church and Catholic Tradition, which I believe Our Lord instituted 2000 years ago.

I will be writing as a man, from the perspective of an Okie, a Christian, specifically a Catholic, and as a cultural and ecclesiological Traditionalist.  I will continue to emphasize our daily life here in Oklahoma, and reflect on topics through that personalized and local lens, for the sake of my fellow local Okies, but also as a kind of intellectual microcosm for the reader outside of Oklahoma, to creatively appreciate the subject matter from a ground level point of view.

Perhaps ironically this emphasis will still place this blog in the category of "Catholic blog" being included by some as part of the "Catholic blogosphere," but this particular blog going forward will be applying my faith and values to social and political issues as the focus, more on the concrete and natural level, than the supernatural. Hopefully those loyal Catholic readers will continue to follow this blog, but I will expand my audience.  As regular readers know, I have deliberately steered away from the trend of setting up a Catholic blog as if it is my own little internet church, where I act as if I am a self-appointed lay pastor and spiritual guru, or have any ecclesial authority akin to a priest, but I do otherwise support Catholic blogs that spread the Faith and offer critiques as allowed by canon law.

The particular reason I originally intended this focus, and why I now renew that focus for my audience and topics going forward, is because I do not have a degree in theology, but rather in philosophy.  I've mentioned it a few times before, but I once withdrew after a year of med school as a young man to discern the priesthood, having been simultaneously drawn to both a profession as a doctor but also to the diocesan priesthood throughout college up to that point.  I completed the first two years of seminary philosophy, earning an MA in Catholic Philosophy, the academic program organized around the writings of Thomas Aquinas and Aristotle.  Since I would discern instead a vocation to marriage, now being married for over a decade, in a secular profession, and while I did receive some theological training in aspects on my philosophy courses, my academic outlook is very philosophical, which is oriented more to a secular-themed blog, inspired by and ultimately oriented to my Faith, than to giving any kind of authoritative, weighty theological analysis of the post-Vatican II pastoral policies and praxis of the contemporary Church.

Though I have for the last 20 years placed my ongoing adult catechism within the traditional thought of the Church, emphasizing traditionalist books when I read books published since the 1960's, having attended the Latin Mass these last decades, gaining some level of knowledge about the current state of the Church, it strongly seems to me more to my advantage to write on the level of philosophy, and at times Christian philosophy per se, than making  theological critiques, though admittedly the two realms--philosophy and theology, and likewise the secular and religious realms--overlap, as God intended.

Dear reader, we are dealing with a culture war on several fronts: attacks by Leftists on religion, Christianity, liberty, the family, marriage, and the individual.  We are seeing battles waged against those Ideals of civilization which our forefathers gave their lives for during World War I and World War II.   And now we are closer than ever to World War III.

We now are witnessing before our eyes a super battle, an international perfect storm, one that is planned, a collection of all those battles, in this new Great Reset program, by the globalist elites, to socially and economically collapse the West, create a world Crisis (pandemic --> famine --> world war --> second great depression), so they, the Leftist elites in the ruling classes will have absolute communist control.

Ultimately, they aim to destroy everything in the soul of every person under their control that gives them true peace between themselves and others, and with God.  It is a diabolical crusade waged on the common man across the nation, and now the world, and we must publicly resist and refuse to conform.  Whether you are a Catholic, Protestant, a member of another religion, an unbeliever, agnostic, or atheist, these demons have waged war on the internal peace and prosperity of our minds, free wills, and our soul.

Hence the need for blogs like this, appealing to every man and woman of good will, who searches for God, the Truth, and the Good.

That said, to keep me motivated writing, one long term goal for this hobby is to make some supplemental income here, by writing books, asking for donations, etc.  So until I write again next Christmas, to my renewed and expanded audience (which also still includes my fellow believers), please consider a charitable donation/sign of support in the form of a mere $4.95 purchase of my e-book The End of the World as We Know It, up there in the right hand corner.

Buy My Book Here: The End of the World as We Know It

If you enjoy reading The Okie Traditionalist blog, please buy my e-book The End of the World as We Know It, available at Amazon for only $4.... 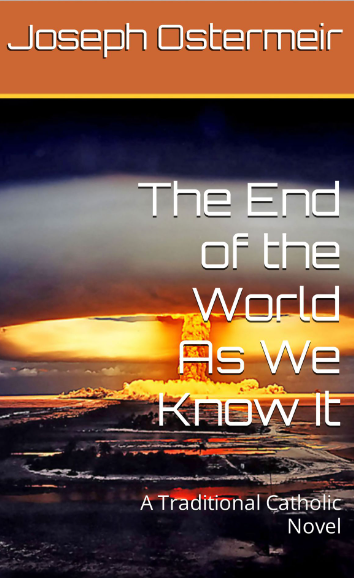